If you are new to our website, you may have missed the first maple syrup story and the rocket stove Charles built to cook the sap down with:  https://trilliumcenter.org/2013/01/14/lets-make-syrup/

After I made 3 gallons of syrup I decided to make a batch of sugar. The process is mostly the same as syrup, which I’m going to share here since our first story focused on the stove.

Boil sap down. It takes 40 gallons of sap to make 1 gallon of syrup if the tree tapped is a sugar maple. Many other trees produce sap that can be boiled down to syrup, but most of them are in the range of 80 gallons of sap to make 1 gallon of syrup. These trees include other maples and most nut trees (walnuts, beech). Some of the syrups out there are actually made with bark tea and sugar rather than sap. I’ve seen wild cherry bark syrup, tulip poplar syrup, and hickory syrup.

I worked with three batches of sugar maple syrup. I used a method that doesn’t involve a thermometer or hydrometer. I boiled the syrup until the surface took on a sheen that reminded me of saran wrap. Then I immediately canned it. The second batch I did the same thing, except that I didn’t can it right away. I watched to see how thick the sheen got. This batch ended up thicker and darker. The third batch I chose to use a thermometer. This method is based on boiling points. The boiling point for water varies depending on elevation. The elevation here is approximately sea level (180 degrees). To make syrup, it needs to boil at about 7 degrees above the boiling point of water. This batch was thicker than the first but thinner than the third.

r making syrup except that the syrup needs to boil at about 40 degrees above the boiling point of water. A note on this, I boiled it at 220 degrees and I noticed that it hit 220 right before it’s about to boil over. So if you don’t have a thermometer you could take a chance and just watch for the right moment. After it boiled, I poured it into two shallow trays and a wooden bowl. I tried the wooden bowl because one of the sources I looked at recommended it. It took about 24 hours of stirring to complete the process. I didn’t stir constantly for 24 hours, but let it crust over before I stirred. I let it sit while I slept, then in the morning I set the trays on the wood stove to hasten the evaporation. Once it felt dry enough I poured it into jars for storage. Oh, and I ate too much maple sugar, but it didn’t make me feel sick the way white sugar does. 🙂 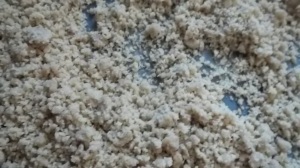 Resources Both of these sites have more detailed information on tapping trees and making syrup: http://ohioline.osu.edu/for-fact/0036.html http://www.tapmytrees.com/

Leah Wolfe, MPH, is a community herbalist and health educator at the Trillium Center. Learn more at trilliumcenter.org View all posts by Leah Wolfe