So this happened. After nearly a year and a half, my search for a dog has come to an end. I’ve poured over every Aussie rescue, adoption agency and Craigslist post within 200 miles looking for a new companion. Too many times I’ve sent in applications for adoptions, only to be told that I either don’t meet the irrationally high bar for qualifying to adopt or that someone beat me to it. The one dog I did go meet, growled at me the first time we laid eyes on each other. I was looking for a full blood female Aussie. Preferably one that would show up in the dark (not all dark colors) and that wouldn’t bite kids or goats, which is fairly common among the breed. Recently I decided that the time had come to act and that I was being too picky. Granted, I could have just gone to a breeder and chosen the perfect creature off a menu, but I preferred the idea of getting an animal that someone else didn’t think was worth the trouble. There’s just something about “the unwanted” that has a delightful resonance to me. As my fruitless search continued, I began to consider dogs with less than perfect lineage, as long as they were still stock dogs. It’s remarkable what passes as an Aussie mix in the eyes of shelter web managers. An awful lot of the dogs looked exactly nothing like an Aussie. In my vast and worldly opinion (aka the meaningless mutterings of an aging buffoon) there’s too damn much pit bull blood out there. And after my first boy, Panama, got his front leg nearly ripped off by one, I just can’t abide having one in my house. I fail to see the attraction to having a live hand-grenade sleeping at the foot of my bed. My sister has 2 of them now. Dunno.

So me and this wee beastie are going to give it a go. Her name is Elsie. That’s long for LC. Because I’m a dork. She was the runt of her litter. Her mom is an Aussie but apparently a bit of a tramp. The dad is some sort of Border Collie mix. Spreading it around must run in his family. Her litter was born on January 15 and promptly dumped at a high-kill shelter somewhere in North Carolina. Save-a-Mutt pulled them out and put them into foster care in Mt. Airy, NC, where she stayed until this past Friday. After getting pumped full of veterinary drugs, she was loaded onto a van and delivered to a Petsmart parking lot at 10:00 Saturday night. I felt like we (there were 6 other groups ) were a bunch of drug hounds waiting on our dealer. There were couples, young and old, a group of 3 women in their early 20s and me.

This is her immediately after getting out of the van. I had found a small plot of grass in the parking lot and plopped her down into it. I think Leah referred to her as a crispy critter when I sent her the picture. Elsie was wobbly and didn’t seem to know what to do. “Who’s this strange man with the giant beard?” When I put her in the car, she just stared at me for the entire hour and a half ride home. A tiny girl out in the confusing world of big hairless monkeys. One who had been taken from her mom, probably too early, suddenly and with no explanation. Then schlepped around from shelter to foster home. Always with no expectations. Then 2 days in a van, alone and vibrating. I can’t imagine what that must have been like.

The last day and a half has been rough, particularly for Maly. He’s very confused by this little girl we brought into the house. They get along well but he wants to take things further than either she or we are willing to allow. But he’s a smart guy and seems to be getting the point. Can’t be easy for him. New dog, getting all the attention he used to get, can’t hump her, everybody gets mad when he tries. Crazy monkeys.

As if a new puppy wasn’t enough of a change, Leah went and got this yesterday. 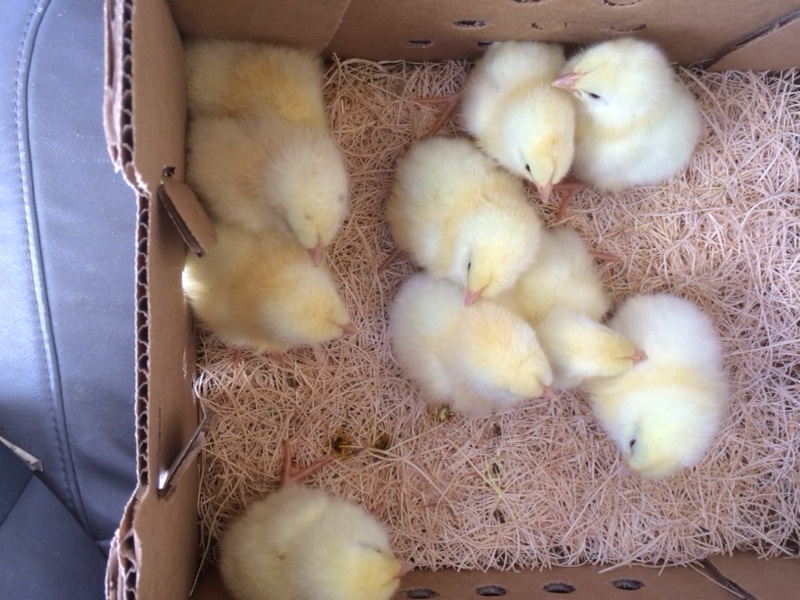 10 little peeps, destined for the freezer. Because why not? They’ll spend a few weeks in the greenhouse scratching around while their feathers come in and then they’ll move out to the chicken tractor I put together last month. Life goes on.